Mary Knight graduated from Assumption College in 2002 with a double major in Media Communications and Foreign Languages (French and Spanish). Mary is the Assistant Program Director for 104.5 XLO in Worcester, MA (a Cumulus Media radio station). She can be heard on the air hosting the Midday show from 10 a.m.-3 p.m. daily. Below, Mary shares the steps she took during and after college to break into the broadcasting industry.

So…you want to break into the broadcasting industry? Bring the right skill set with you, and anything is possible!

It’s funny, as a little kid, I never dreamed of being a radio host. I was always a performer: dance lessons, choral concerts, band practice, school plays…I did it all! Even though I’m not on stage now, I do perform each day, just in a different way. Here’s how I got there…

At Assumption, I fell in love with television production. I spent all of my free time at the Media Center and even worked there over two summers! I took all of the television courses. I learned how to be a director and operate the control room; I ran around with the TV cameras getting the perfect shot; I spent hours editing video; and I loved being in the spotlight as an anchor for the news. Assumption gave me the opportunity to get great hands-on experience, so definitely take advantage of the Media Center! Ted, Tom, and Laurie are a wealth of knowledge, and are there to help guide you. 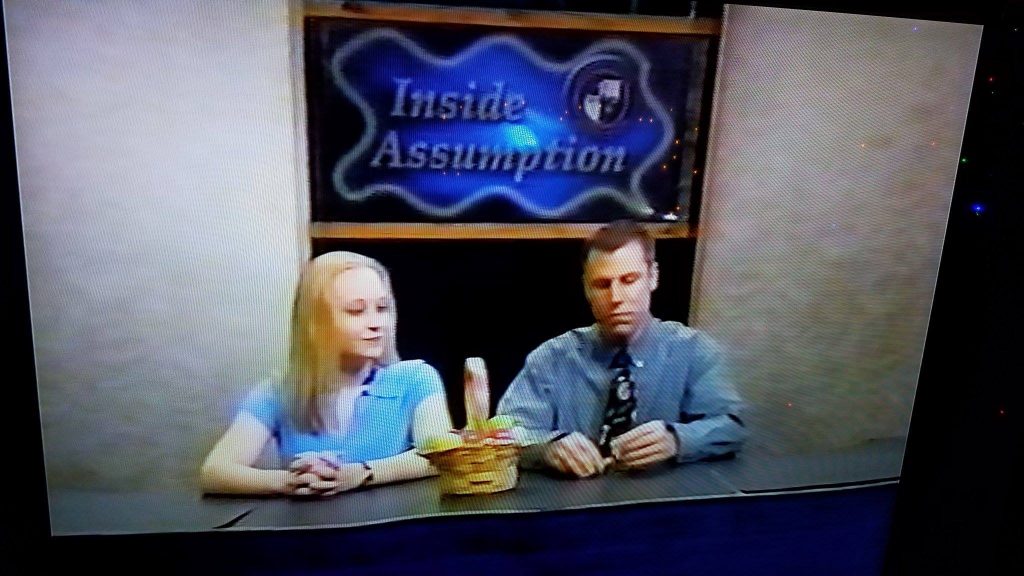 Taking Speech with Professor Knowles really helped me prepare for the field. I learned how to run a meeting, create a project from scratch, and execute the project successfully: all practical things that are so important in any work environment. Writing is also an important part of any broadcasting job. Pick the brains of Professor Lang and Professor Land in the English department, and take as many writing courses as you can. Even though I talk for a living, I use my writing skills every day, especially when it comes to re-writing poorly written commercial scripts!

A performance course or activity will always help you in the broadcasting industry. I acted on stage in plays, and I performed in the chorale and concert band. Being comfortable in front of people or an audience is so important. Who knew I would one day host a yearly event in front of 1,600 listeners! 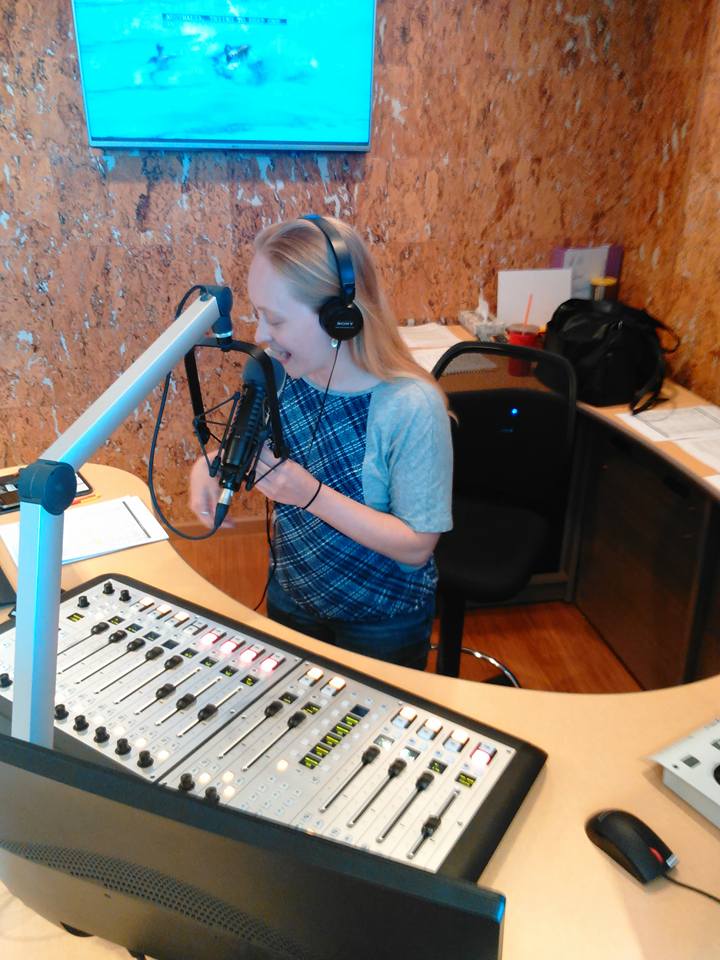 Technology has changed so much in radio and television broadcasting in the 16 years that I’ve been “in the biz.” Computers run the world, so there are fewer jobs available. People used to get their start working nights, weekends, and holidays. Now our computers hold our song files and run our playlists, so you don’t need to have someone always in the studio. This can make it difficult to get a broadcasting job.

So how do you break into the business and get your foot in the door? INTERNSHIPS!

I started as an intern at 104.5 XLO in January 2001, and I managed to turn it into an unexpected career! During my internship, I worked in the studio with Rick Brackett every Saturday night while he hosted an all-request Awesome 80’s show. Rick taught me how to find songs, cue up music, edit requests, and create a flow for the show. He taught me how to talk on the microphone, and I remember being so nervous the first time I ever spoke on the air! My internship at XLO was the hands-on radio experience that I might not have learned in a classroom, and it was what kept me pursuing other opportunities at the radio station.

After my internship was completed, I continued to join Rick in the studio every Saturday night for the Awesome 80’s show. I learned and practiced as much as I could, and in August of 2001, I was hired to host on-air weekend shows. It was an amazing opportunity and gave me the chance to work weekends throughout my senior year of college. When I graduated, I was hired full-time at XLO. I worked nights and weekends, perfecting my craft. Eventually I worked my way up to being the Music Director, then Midday Host, and finally Assistant Program Director for XLO.

Everything I learned about radio was from working at XLO, so the best advice that I could give you, would be: BE A SPONGE! Absorb as much knowledge as you can about a particular career field. Learn all aspects of the job and learn about what other departments do. We have hired so many interns for part-time and full-time jobs. Our company loves to hire from within, so an internship is the perfect way to get noticed and get your foot in the door. 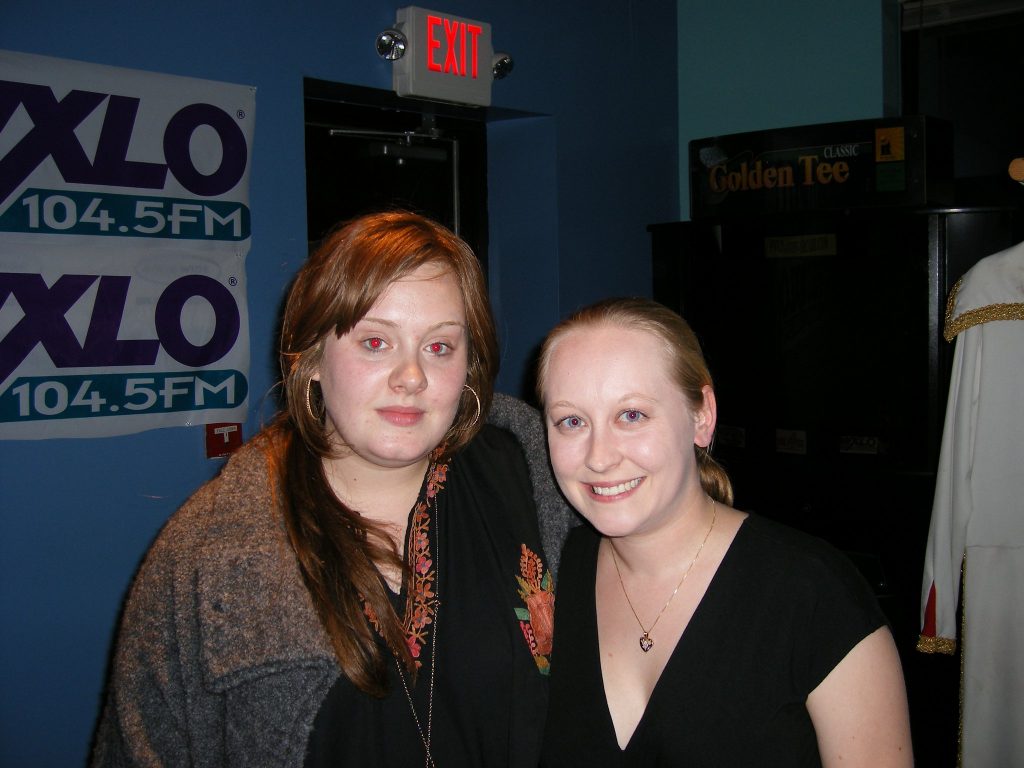 Adele and Mary Knight in the XLO Music Loft – 2008

If you’re graduating this year, congratulations! There are some amazing jobs in the broadcasting industry waiting for you! If you want to be on-air or in front of a camera, have a headshot ready to submit with your resume, and don’t forget to make a demo reel that showcases your best work. Make sure your demo will grab the attention of a future employer within the first 30 seconds. In the broadcasting industry, and especially in New England, I’ve learned two other important things: Network, Network, Network! Set up a Linked-In profile, grab business cards, and make contacts! And when you do get hired, be friendly with the people in your office. You never know when you might be working in a new job with a coworker from your past.

If you’d like to know more about Mary Knight’s job at 104.5 XLO, email her at mary.knight@cumulus.com. 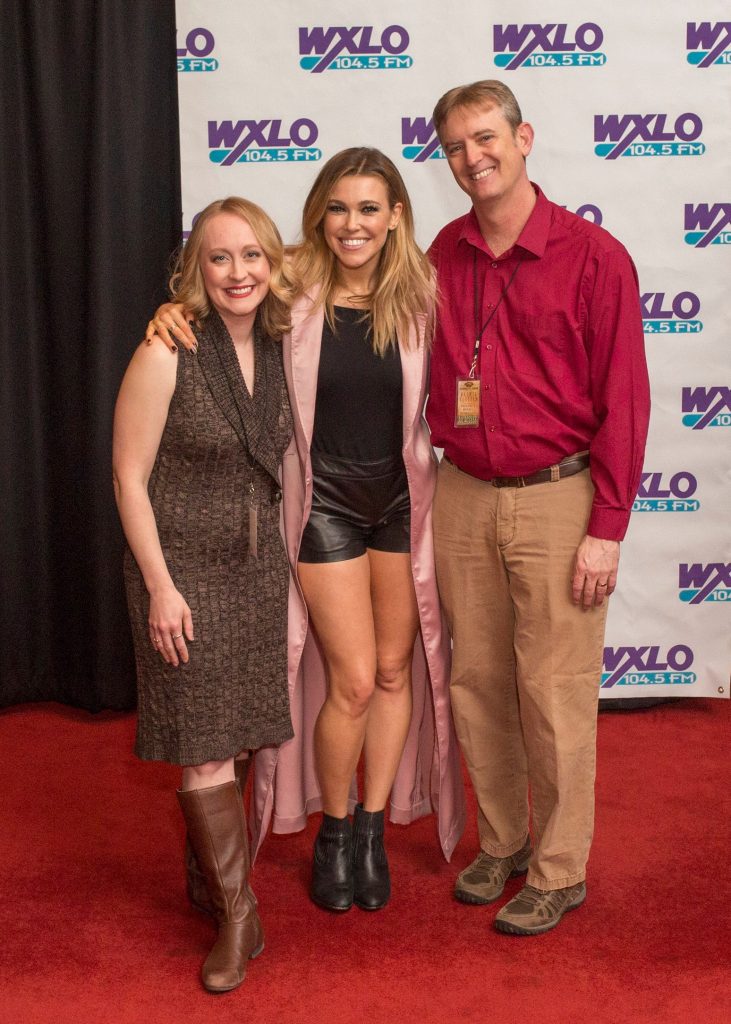