Hi Fellow Hounds! I’m Molly Wiley, a graduate from the class of 2012 which feels like yesterday and 100 years ago all at the same time. I was lucky to call Assumption College my home for 4 years, the same way all of you do now. I’ll be filling you all in on my journey through networking, landing my first job & navigating my career when I see you on November 6th but in the meantime, I thought I’d share a little bit more about me and my time at Assumption College. 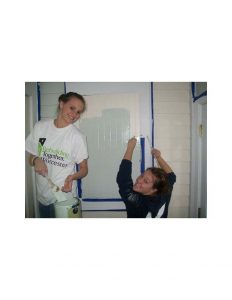 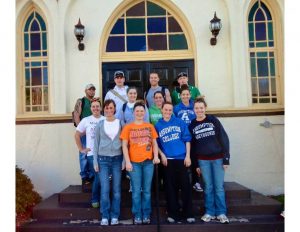 During my time at Assumption I basically signed up & participated in everything you could. Between SGA, Orientation, a SEND trip to New Orleans post-Hurricane Katrina, the Reach Out Center and more I filled my days from morning till night. My face can hopefully even still be found in the Plourde from 2010 when my team, Hittin’ Long Balls, was Coed Softball D1 Champions in intramurals. Some of my best memories though were made through SGA and some of them have even come full circle most recently in the last couple of weeks. Every year I ran for Class President and for Senior Year I went for SGA President, I had so much fun and made some of my best friends through my involvement. 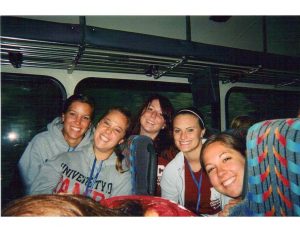 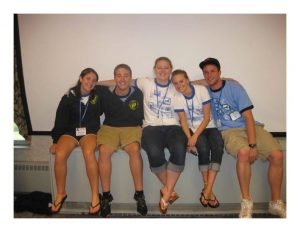 My senior year though I actually participated in one of our first ever Bone Marrow Drives at Assumption, throughout my time I had never been a blood drive girl because the idea of it totally freaked me out, but Bone Marrow was easy, it was simple mouth swab. Well fast forward almost 8 years later and this past April I heard from the donor agency we had all signed up for that day in Hagan Campus Center Hall. They told me I was a possible match for a patient who was a 37-year-old woman with Acute Myeloid Leukemia (AML). When I first read the email, I thought it had to be spam, but I soon learned that it was not and the following 6 months would include tests, physical exams & more all at Dana Farber in downtown Boston. Just a few weeks ago on October 1st I donated via PBSC, also known as donating stem cells, and sent over 7M stem cells overseas. What’s the moral of this story? Assumption & SGA not only helped to change my life but someone I have yet to even meet. It shows you that what you do in your four years can change the trajectory of so many lives and what you learn and take with you will mold you in ways you can’t even yet imagine.

Now let’s talk a little bit more about where I landed today and what got me there. I was a marketing major & international business minor, we did NOT have a fancy new building like you all do today, we were sweating it out in La Maison 98% of the time learning about marketing, management, case studies and more. The reason I decided to major in marketing is actually pretty simple, I was terrible at Chemistry. When I was growing up I always thought I wanted to be a Pharmacist and then MCPHS opened a campus in Worcester and all the pieces were coming together, until I took high school chemistry and realized this was not something I had the skills to make a career out of. It was so hard for me and I knew I needed to pivot, what did I love? People. My whole life I’ve been one of those people that loves meeting new people, learning about them and helping them any way that I could. Then I thought about how I had been working at the mall for the last 5 years of my life, at the time, and in retail. I found it fascinating how people could be influenced in their buying behavior, what made them tick and why they did what they did. So, marketing became my move and the future was a runway I had ZERO idea how to navigate, neither of my parents came from a business background and I didn’t know a soul who could get me any connections for an internship or job after college. *Insert Here* the Career Networking Dinner you’ll hopefully be attending, if you’re reading this, in a few short weeks. On a Thursday night, I got all dressed up pushed myself into Hagan Campus Center Hall and the rest is history & you’ll learn more about it on November 6th.

One of my favorite professors during my time at Assumption was Egidio Diodati, I took his Advertising & Asian Business Practices classes while I was there. He challenged me in ways that prepared me for the real world and at the time we certainly didn’t know it. He ran a tight ship & took attendance at the end of class, & whether you got a 0 or 100 depended on your participation level. It taught me that just showing up isn’t enough, it’s a big part but you’ve got to participate and help build the greater good. He also was known as one of the toughest professors in the business department at the time but only because he didn’t believe in letting you skate by, you had to try and put the effort in to tackle his exams and assignments. But in office hours you could find him listening to ABBA loud enough to drive the rest of the department crazy and smiling from ear to ear when he talked about his grandchildren who lived in Wisconsin. I am still so grateful to him all these years later.

Assumption created a place for me to learn who I was and what I wanted, it was the perfect place for me to make mistakes and accomplish so many times what I thought was impossible. I feel lucky every day that I got to experience my four years there and that I will always be a Greyhound. On my bucket list I’ve had for the last 9 years that I hoped to one day be called to be the Keynote Speaker for the Career Networking Dinner as that one night has not only shaped my career but shaped my life. I can’t wait to meet you on November 6th!

Register for the Alumni Networking Night by October 29th to reserve a spot here: https://assumption.joinhandshake.com/events/296680 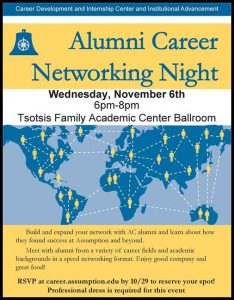